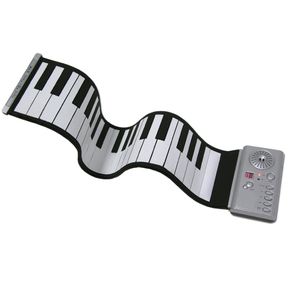 All string instruments present a convoluted layout of half-steps and whole-steps. It is not unusual for students to be playing for several years and still get stuck in the confusing maze of sharps, flats and naturals. If not taught the truth about scales and modes, they will quickly come up with their own associations and apply them globally.

A common example of this is a cello student who associates the natural sign with his second finger.   This would include the assumption that sharp signs are for the third finger.   When it comes time to learn the lower strings, complete meltdowns can occur.

This is why, as soon as possible, it is good to begin teaching half-steps and whole-steps – on the keyboard. A roll-up keyboard is indispensible for this task, even more useful than the real thing, because one can slip a piece of (movable) paper under it and, demonstrate where key signatures come from (more about this in a future post).

What follows is an introductory music theory lesson about intervals. This material needs to be reviewed, anchored, and expanded upon over time.

On a keyboard, using a pencil, write the note names on the keys – only one octave of C to C.

(It is important that students play only with one finger so as not to introduce more confusion)
Ask the student to play every single note from C to C – all the white and black keys, then tell them it is the Half-Step Scale.

Once they get it, ask them to play it again as ask what is the name of the scale they just played. (save the word chromatic for a few years down the road).

Ask them how many half-steps do they think it would take to make a whole step – get out your pie charts if necessary.

Then, ask them to play a whole step scale – easier said than done, but don’t do it for them! They will be inclined to play all the white keys.

If confusion sets in, ask them to play one note, then only touch the next, play, touch, etc. This will guide them through the dicey land of the three black keys.

Then ask the student what is the name of the scale that you just played? (they may be too fried to remember).

Go back and forth between the two scales until they are clear.

Then, have them play only white notes, ask them if it sounds familiar, and tell them it is the C major scale.

Then have them repeat out loud 5 times while looking at the keyboard:

Anchor it one more time by having them play the C major scale, then pop the question:

Where are the half steps in the C Major Scale?

Rinse, and repeat as necessary. 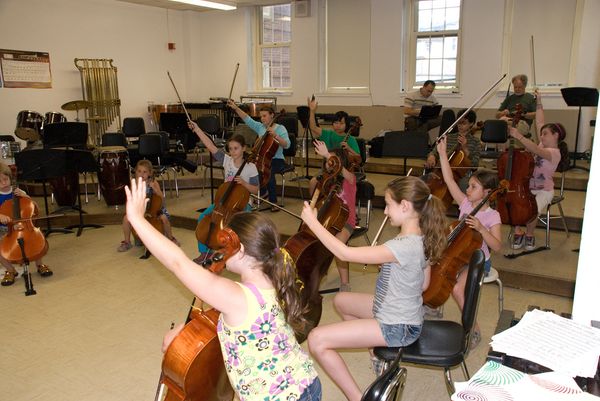 Performance Skills – Performing for others on a regular basis gives students an opportunity to develop the state of mind necessary to perform.   Playing pieces they are currently learning reveals spots that need further attention.  Playing pieces that are well learned and ready for performance gives the student the chance to see whether or not their technique provides enough stability for consistent execution.  Most importantly, the type of focus necessary for performing needs to be practiced.  It is good to learn how to perform by both memory and while reading music.

Sightreading – Like performing, sightreading is a skill that is best learned under a little bit of pressure.   Working along with others, understanding when things are tricky, and getting instant gratification through ensemble pieces fosters a positive relationship with sightreading.

Ensemble Skills – It is important to know how to support your fellow players with your own playing.   Sometimes we need to lead, sometimes follow, and sometimes do both.  This is the essence of playing chamber music.

Music Theory – String players often do not have the same opportunity to learn music theory as pianists do because we are primarily a single line instrument. Working together as a cello ensemble to explore scales, harmony, rhythm and texture makes learning difficult concepts much more entertaining and memorable.

Synchronized Bowing Patterns – Bowing is the language of string players.   Learning the basic vocabulary of the bow is easiest done surrounded by others making the same gestures.  Much like dance class, practicing as an ensemble is the quickest way to learn new patterns.

Reinforcing Difficult Cello Technique – There are many aspects of playing a string instrument that are very tricky to grasp such as bow angles, left hand positions, extensions, shifting…. the list is endless.  Watching others and participating together in executing short snippets of technique helps students respect the process of acquiring the ability to play this gorgeous instrument.

Develop a Taste for Good Sound – Feel first hand what it is like to contribute your sound to an ensemble and understand the necessity of having command of your tone.

Good Intonation – In the sonorous environment of several cellos playing together, one can feel the thrill of fine intonation.  Learning to hear when the intonation is truly blending helps one to find and adjust notes quickly.

Learn New Repertoire – Learn new pieces as others play them.  It’s great to listen to fellow students perform pieces they are working on because you can follow their progress and gain an understanding of what goes into learning a particular piece.